In my last word I shared on the book of Amos, and from the time that the Lord said I was to read this book, I have been mulling over it. Amos was uncompromising in his devotion to God and through this prophet, the Lord made it clear to the nation that their religious prayers and sacrifices did not compensate for the evil taking place and would not protect them from the ruling of the Righteous Judge. God always looks at the heart of man and its motivations rather than its actions, which can often camouflage unrighteous motives. The foundation of God’s throne is justice and righteousness—this is by His determination. God highly esteems righteousness, fairness, and balanced scales, that is at the heart and core of who He is!

In the time of Amos, God confronted the great injustices happening in every sphere of the nation; he addressed the blatant disregard for those living in abject poverty and lack, while the rich and elite got fat on excessive and lavish lifestyles. The nation did not guard against the accelerating demonic drift into lawlessness, nor did it comprehend the level of God’s displeasure over the injustice and unrighteous living. Warning after warning was sent, but the nation did not regard the message. The word of the Lord Amos brought to the nation was rejected. They admonished him to stop prophesying and questioned his credibility, condescendingly noting that he was just a lowly shepherd.

Through the prophesying of Amos, God repeatedly said that he would not relent or pass by the nation’s sin any longer—it was a wake-up call to change their ways. The Lord gave much time for repentance and much opportunity for the nation to turn from their wicked ways, as happened in Nineveh. At this time other prophets like Hosea were also prophesying of a coming day where they would be called to account—a divine intervention was impending. But to no avail! In God’s longsuffering, thirty to forty years passed before Assyria suddenly marched against Israel.

There was a time when I was to share a word from the Lord at a church, but lost my voice. I fervently prayed for God to heal my voice, but he didn’t. Instead, He said to give the word in the voice that I had—that my whisper was to be a sign and a wonder. He said that those who had ears to hear would hear. As it turned out they did hear, and God moved powerfully. How important it is to hear what the Spirit is saying—to understand His movements and hear His warnings. God gives the humble ears to hear, and He gives much time to repent. However, the day does come when He says, I will not pass by any longer!

A Day of Reckoning is at Hand

During a recent time of intercession, I heard the Lord say the words, a day of reckoning. There was weight on the statement, and I felt led to check the definition of the word reckoning. It means in essence, a settling of accounts, the time where we are forced to deal with a grave situation—the time where God has reached His limit or patience—the end of the discussion. In the Hebrew, the word reckon is pquddah and also means visitation—a time of encountering the living God for a time of discipline. In the book of Ezekiel, God declared that even if Noah, Moses or Daniel were to intercede on behalf of the land, that He would not listen to them (Ez. 14:20). Even though God is longsuffering, He does have limits to his patience. When time is up, the time for dialogue is over. 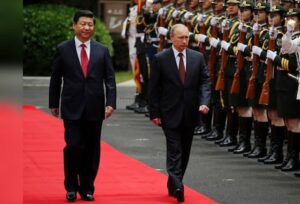 A Day of Reckoning is at Hand. The present U.S. administration has clearly not been given the mandate or the anointing to lead the nation, or to carry the responsibility of being the world leader. They are presently fumbling and stumbling under the weight of the office and the mandate the job carries. The shadow government of the prior Obama administration seems also to be very much in play as the press secretary recently admitted that he was meeting on a regular basis with Biden. Many news sources are now calling the present administration, Obama’s third term. It could well be called the Obiden administration.

“Woe to those who make unjust laws, to those who issue oppressive decrees, to deprive the poor of their rights and withhold justice from the oppressed of my people, making widows their prey and robbing the fatherless. What will you do on the day of reckoning, when disaster comes from afar? To whom will you run for help? Where will you leave your riches? Isaiah 10:1-3

Nations have fallen to a gross departure from the norms of a civilized society. Horrendous things are now taking place such as young children not only being trafficked in the sex trade, but the latest horror has become organ trafficking. Children’s organs are now a valuable commodity and can go for hundreds of thousands of dollars. This has become big business in Africa, China, and Mexico where children are kidnapped, and their organs sent to Europe and North America.

Recently a Democratic state lawmaker spearheaded a bill that would criminalize medical enhancements given for children and minors under 18, for transitioning to another gender. It should not be necessary to legislate against insanity, however, even so, a multitude of his colleagues denounced both him and the legislation. There are also many with liberal mindsets, who find babies being aborted up to the day of its birth as acceptable. A culture of death and evil is steadily and ominously seeping into society where it has become acceptable to call good evil and evil good, where pastors and Christian leaders are prevented from meeting and preaching Christian values.

A day of reckoning is also coming for the elites of the world whose lives are being weighed in the balances. What is owed must be paid. What is stolen must be returned, a balancing of the accounts is being called for. Those who thought they had gotten away with fraud, theft and robbing the nations of its wealth will be called to account for it. There is an extraordinary ever-growing disparity between the rich and the poor, those dominated by the rise of the mega corporations. During the space of one year, during the time of Covid, when so many people have suffered, lost their livelihood, their businesses, their incomes and even their lives, these corporations have doubled their profits in the hundreds of billions. Thousands of small businesses have had to permanently close their doors, while mega corporations grow to become Global giants, increasing their dominance and influence over nations and even governments.

Where is God in all This?

Some may have wondered where God is in all of this, and why He has not moved to stop the madness. Why has He allowed it to continue? God sees it all, as nothing is hidden from him. We cannot try to fathom the higher and surpassing ways of God, His perfect understanding of all things, and the ways and timing of how He chooses to move. But can we imagine How grieved He must be! The One who loves beyond understanding, especially the children. Repeated examples in scripture warn us that, though it may be long in coming, the day of reckoning does come! The Word reveals that God chooses to be silent in seasons, but His silence does not last forever!

“Make thankfulness your sacrifice to God, and keep the vows you made to the Most High. Then call on me when you are in trouble, and I will rescue you, and you will give me glory.” But God says to the wicked: “Why bother reciting my decrees and pretending to obey my covenant? For you refuse my discipline and treat my words like trash. When you see thieves, you approve of them, and you spend your time with adulterers. Your mouth is filled with wickedness, and your tongue is full of lies. You sit around and slander your brother—your own mother’s son. While you did all this, I remained silent, and you thought I didn’t care. But now I will rebuke you, listing all my charges against you. Repent, all of you who forget me, or I will tear you apart, and no one will help you. But giving thanks is a sacrifice that truly honors me. If you keep to my path, I will reveal to you the salvation of God.” Psalm 50:14-23 NLT

I don’t particularly like writing words highlighting darkness or the discipline of God. I would much rather write of the Joy, the Glory, and the Light, but know I have to be obedient to what I feel God is leading me to share. Writing about the Light and about Jesus is easy, as He is so magnificent and beautiful, full of goodness, majesty, and Glory.  But God is grieved about these things, and if we carry His heart, we will be grieved also and be moved to align with Him in His intercession. It is easy to become self-centered and inward focused on our own needs, desires, and comforts. It is easier to choose to ignore the presence and realities of evil. But there is a rising cry, that is becoming a crescendo, coming up from the Earth before the throne of God—from the children, from the despairing, and from the blood of the slain that speaks.

“The LORD will march forth like a mighty hero; he will come out like a warrior, full of fury. He will shout his battle cry and crush all his enemies. “I have long been silent; yes, I have restrained myself. But now, like a woman in labor, I will cry and groan and pant.” Isaiah 42:13-14

The Lord is calling for a heart change in His people and not an outward show of piety—a true move of brokenness over sin. Rather than attempting to justify our sin nature, its time to get real with God. For many days I have been hearing the words, rend your hearts and not your garments, and later found it in scripture:

“So rend your heart, and not your garments; Return to the LORD your God, For He is gracious and merciful, Slow to anger, and of great kindness; And He relents from doing harm.  Who knows if He will turn and relent, And leave a blessing behind Him.”  Joel 2:13-14