The New Wineskin is the Temple presently being refashioned for God’s Glory and for Christ’s return. It rises in conformity to God as His final resting place—a sanctuary for His eternal habitation. After Israel left Egypt, God instructed Moses to, “Build Me a sanctuary!”  After David received the blueprint for the Temple, to House the Presence of God, he tells Solomon his son, “Be strong and do the work.”

“Every part of this plan,” David told Solomon, “was given to me in writing from the hand of the LORD.” Then David continued, “Be strong and courageous, and do the work. Don’t be afraid or discouraged, for the LORD God, my God, is with you. He will not fail you or forsake you. He will see to it that all the work related to the Temple of the LORD is finished correctly. 1 Chronicles 28:20

So, God’s intention is for His house to be built, and that it is built correctly! Each dwelling place of God portrayed in the Bible, represented a facet of God—Law and order, Worship, Glory, and Grace. God’s final place of rest will represent all facets of Himself.  This final Sanctuary is the Wineskin of Jeshua and will reflect the Hebraic dynamic.  Believers of all nations are authentically grafted into the Vine that is Israel, that is Jeshua—A vine out of Egypt planted in Israel for the salvation of the world—out of Egypt I have called My Son (Matt. 2:15, Hos.11:1).

“You have brought a vine out of Egypt; You have cast out the nations, and planted it. You prepared room for it, and caused it to take deep root, and it filled the land. The hills were covered with its shadow, And the mighty cedars with its boughs. She sent out her boughs to the Sea, And her branches to the River.” Psalms 80:8

Jeshua, Son of Israel, is the Vine chosen by God connecting the River flowing from the Throne, through Israel into the Sea of humanity. Israel is the Hebraic root of all Gentile believers who are authentically grafted in. Jeshua is the Root and the Offspring of David—the destination and completion of the Journey that culminates and is completed in Jerusalem.

During the new era of the 20’s that was initiated by the entrance of Covid-19, God took this opportunity to begin the dismantling the blueprint of His House generated by man’s agenda and He began to re-build it from the blueprint ordained in Heaven. God’s blueprint is modeled in the Messiah—the blueprint to which His Glory will manifest in passionate love for His Bride.

It is important and necessary for all to understand that Jeshua is a Jewish King. His Throne is established on the Mountains of Jerusalem, divinely connected to His Throne in Heaven. He is seated on His Throne with Jerusalem as His footstool. Jerusalem—the City of the great King, is divinely and eternally connected to Jeshua, by His own determination and will.

“Will you at this time restore the Kingdom to Israel.” This was the question the disciples asked of The King. He answered them that it was not for them to know the time. Heaven is presently holding back the King until the times of restoration, back to the Kingdom model centered in Jerusalem, from where He will rule and reign.

The Ekklesia are those who represent the Kingdom—they serve the Great King and are sent out endued with His authority!  They bow to His will. They serve His desires. They serve no other will but His. Our commitment is to Him and to enforce His will. This type of devotion will attract persecution to all who serve Him—both Jew and Gentile.

Persecution will come. I recently read a tweet from a well-known person stating that forty five percent of evangelical Christians refuse to get the vaccination and are now the new North Korea or China, meaning the new enemy.  I have also heard prominent Media personalities attacking Christians with similar statements. Persecution will be rising exponentially in the coming days for both Jews and Christians.  Believers must find their place of strength and safety in the Lord—He is our Glory zone of refuge.  Worship the King, obey the Holy Spirit, bless Israel and you will be blessed. Don’t be a fault-finder—love, pray and bless the Jewish people.

“For the days are coming where to find Me will be to find Me locked in My embrace of Israel. The time is coming when I will no longer look away or be silent at those who discount or disparage My people.  I Am Israel—Prince of God! The history of My Coming to planet Earth is embedded eternally into Israel’s history—I suddenly came to them, for the salvation of the world. I came from the womb of My Beloved. I will return to My place in Jerusalem to rule and reign. Those who will not align to this truth will find themselves on a different path than I am travelling and will be outside of My will and purposes in this hour. For I am moving on a clear path—My destination is Zion.  I am moving in Aliyah—returning to My homeland, from where I will rule the Earth. Those who are aligned to My will, will find the path ahead saturated with oil and with divine providence, for My hand will rest on you with great favor and Glory.

Prepare My Sanctuary in your midst and build My House. Build according to My blueprint.  My blueprint has a Throne—A Throne set in Jerusalem. My blueprint is a Kingdom.  I am a Great King, and everything surrounds My will and My desires. Everything revolves around serving Me, pleasing Me and Ministering to Me. Leaders you are called to minister to Me, to serve Me and bow to My will. Do not attempt to build according to the old ways—look to Me, I am the Center, you serve My will and nothing else. My House will be called a House of tefillah where all come to commune with me and serve My will—where I and I alone am exalted and served. You enter My gates with thanksgiving and with praise; you wait before Me to see what I shall say—waiting at My gates. Honor Me and I will manifest my great Presence. David understood this, that is why the blueprint I gave him will be restored for all nations, and for My second coming. Thousands upon thousands of worshippers were ordained to worship before Me, and thousands upon thousands of priests ordained to minister to Me. This is the House I desire! Return to Me and build my Sanctuary! Arise and work! For I will be with you as you seek my face for direction.

God is preparing to come, to break into the world situation as the Breaker. According to scripture the Breaker rested on the head of a people—an army, prepared to fight with Him to break through the barriers and obstacles, attempting to restrict the way of the Presence.

The warfare is about to ramp up and intensify as His Presence draws ever closer. A tsunami wave of God’s Presence is about to break over the Earth, a wave that will bring great turbulence, change and Glory.  As I was pondering this wave, I heard the Lord say to search the words wave and breaker and was both stunned and shaken by what I found. 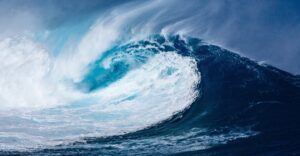 In fluid dynamics, a breaking wave or breaker is a wave whose amplitude reaches a critical level at which some process can suddenly start to occur that causes large amounts of wave energy to be transformed into turbulent kinetic energy. (Wikipedia)

There is much to unpack in this definition in regard to what God is revealing. When the wave pulls back and reaches the critical point at which its energy level is at the maximum, it means something is about to occur. A new process is about to begin. Large amounts of wave energy is then released and transformed into turbulent kinetic energy. This is tremendous energy that creates movement—a movement of uncontrolled ferocious power readied to be unleashed. Why did God tell me to check these words and what is He saying to us? I believe He is saying to be ready for what is about to break over the Earth.

I remember watching videos of the great tsunami of 2004 in Thailand, as it roared and swept over the land uprooting and moving everything in its path—boats, cars, trees and even buildings, nothing could resist the power and the energy of the wave released—yet many did survive. Those that were able to survive did so because of three main reasons. They clung to something secure that was immovable, like  trees and certain objects. Some were able to get to high ground and were safe, and others were able to flow with the wave and were miraculously unharmed—many experiencing supernatural miracles.

These are principles important for believers to adhere to in these times. The secure thing to cling to that is immovable is Christ. Your relationship to Christ must be secured and anchored—He is our strong Tower of Refuge. The high ground of authority in Christ is also the place we must learn to occupy and dwell, before the shaking begins. And lastly, we cannot forget the miracle working power of God to supernaturally save in any situation we may face. Without fear we can ride the waves and the heights with Him to rescue those that are lost.

I began this word with Israel because in the coming days, to be securely grafted into the place where the LORD has chosen to secure Himself, is to be safe and to be blessed. Israel is the center around which everything in the world revolves, as it is the seat of the Throne from where the King will sit to judge the Earth. This is the time to be fully aligned and secured in Jeshua in all His ways, virtues, and the dynamics of who He is as a Son of Israel.

“Israel has experienced a hardening in part until the full number of the Gentiles has come in, and in this way all Israel will be saved. As it is written: “The deliverer will come from Zion; he will turn godlessness away from Jacob.” Romans 11:25-26

“In the last days the mountain of the LORD’s temple will be established as the highest of the mountains; it will be exalted above the hills, and all nations will stream to it. Many peoples will come and say, “Come, let us go up to the mountain of the LORD, to the temple of the God of Jacob. He will teach us his ways, so that we may walk in his paths.” The law will go out from Zion, the word of the LORD from Jerusalem.” Isaiah 2:3 Israel is the high Ground where we must find ourselves to be safe during the coming tsunami wave and shakings hitting the Earth. Everyone must do Aliyah in the Spirit, returning to Jerusalem our future home in the King. Set your anchor in Jeshua, King of Israel, “Blessed is the King of Israel!” John 12 :13