There are three global spiritual movements of gargantuan proportions that are presently underway. First is the rising prominence of the kingdom of darkness, their evil agenda, and attempts to establish a New World Order. The second is the long-awaited Great Awakening—the stirring of the masses in the present shaking, bringing them to truth, and making them ripe for harvesting with the Gospel of Jesus Christ. The third spiritual movement underway is the emergence of a new caliber of believer, of noble character, fashioned in the way of Christ. These are sons and daughters of God being released on the world stage to represent the Kingdom of God and the King’s interest in the nations for this extraordinary time.

For Spiritual leaders, it is important to be cognizant of all three movements to be relevant to the times, the people they serve, and to receive strategic insight for advancing, taking ground, and occupying. Success on the battlefield will require an understanding of all three!

Heaven’s warfare is a forward movement of strength, armed with the keen insight of these three spiritual undertakings. It is foolhardy to attempt to go into battle without recognition of the enemy’s schemes and his deceptive tactics to thwart the advancement of the saints on every front

For example, the present situation regarding the FBI raid on Mar-a-Lago has great significance for all nations, for the purposes of both heaven and hell. The Liberal World Order has set out to destroy Donald Trump’s approval and status over the past seven years. They have blatantly targeted him, but have been unsuccessful in their attempts to destroy him, as the hand of the Lord has been on him to protect his assignments. The forces set against him are now in a panic because nothing they have tried has worked thus far. The FBI raid was the first time a present administration attacked a former President and future presidential candidate—we are truly living in historic and unprecedented times with heightened spiritual activity! The day the raid took place, the Lord spoke three separate words to me over the course of the day. As I watched the events unfold on the news, I was very disturbed, and heard the word OMEN. It is defined as, a phenomenon, an event, or occurrence that portends good or evil; a prophetic sign; a sign or indication of a future event. I found this to be very interesting as I had thought the word was related to only evil, but it can also be an omen of good.

The second word I heard was BACKFIRE, which means, to have the opposite result from the one you intended; or a fire started in the path of an oncoming fire to deprive it of fuel and thereby control or extinguish it.

The third word I heard was MISSTEP which means, a misplaced or awkward step. A false step; an instance of a wrong or improper conduct; a blunder (American Heritage Dictionary).

Whenever God drops words in my spirit, I go digging into the definitions for clarity and further revelation. I sensed here that He was highlighting some things.

As I pondered these words, with a fresh realization of the two-fold aspect of the words omen and backfire, I began to understand that the two forces of good and evil were both at work in this event. God says in His word that He uses what the enemy intends for evil to work for good. Therefore, it is important to not judge the situation too quickly and wait for things to unfold.

The word omen is defined as something prophetic and as an indication of something future. As this can be both good and evil, in this instance, I believe it represents both. The forces that are against Donald Trump, aligned with the globalist agenda, intend to do him harm to destroy his chances of running again as president. They have proven by this raid that they will stop at nothing regardless of the consequences. They see this as their opportune moment for their diabolic plan and will continue aggressively at whatever cost. God’s plan, however, overrules their plan at every turn and works to create the opposite effect of what they intended, as it is in this case—as many rally behind Donald Trump.

This brings us to the second word backfire which means to have the opposite effect of what was intended. This is becoming clear as more is exposed and brought into the light. However, the second definition of this word is the one that I find most intriguing: a fire started in the path of an oncoming fire to deprive it of fuel and thereby control or extinguish it.

After praying about this, I am sensing from the Lord that forces were allowed to inspire this great blunder, to prevent or slow the path of the oncoming fire, planned to sabotage the November elections and accelerate their world agenda in the works.

“Can fire be combated with fire? Sometimes, counter fires (backfires) can be lit in a so-called Controlled Prescribed Burn to starve a fire of the fuel it needs to spread…

A backfire is deliberately started in front of an active fire front…The backfire consumes some of the combustible material and creates a fire belt that the wildfire has difficulty crossing” (The International Association of Fire and Rescue).

I believe the Lord, our Consuming Fire, has set a backfire to remove the life and energy out of the greater fire presently burning out of control in the world, threatening to burn down our house—our present way of life. The raid at Mar-a-Lago created a fire belt intended to suck the life and energy out of the greater fire. The fire belt created could be the tremendous amount of litigation increasing as Donald trump now sues the government for violating his fourth amendment right. The fire belt is also the great light that is now shining on and targeting this investigation! All eyes are watching for further missteps, the exposure of hidden agendas, and secrets. The intense scrutiny is causing a controlled prescribed burn that is starving this fire of the fuel it needs to spread.

The Liberal World Order, using the WEF, the UN, and the WHO has been getting bold, brazen, and sloppy. They have boldly come out into the open and are not holding back their evil plans. Because of this, they are shocked by the pushback they are now getting in the nations of the world. God has His praying people. He also has many courageous people like the truckers and farmers who are standing up against tyrannical governments legislating disturbing policies and refusing to back down.

In Israel, when a king fell into sin, it brought great calamity to the nation. For this reason, God sent His prophets to kings to give them both direction and warning. Elijah was one such prophet who became very grieved by the terrible idolatry that had invaded the nation. God mightily used him to bring down that administration—the King, the Queen, and their four hundred prophets of Baal. It is the same with both kings Herod, and Zedekiah; God sent Jeremiah and John the Baptist as prophets to give them warning, but they refused to listen.

Because the saint abdicated their God-given position to hold the line of righteousness in every sphere and mountain, including the political realm, we have now found ourselves mired in this present catastrophe. God places His watchmen on the walls to guard the city. Today, many have abandoned their position succumbing to intimidation or discouragement, as they are either discounted or not listened to. 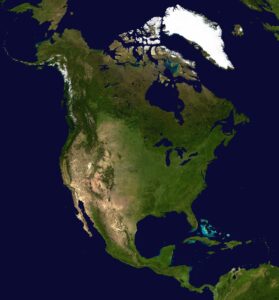 God will protect only what He has built! He protects His work! Twenty-five years ago, the Lord showed me a picture of North America. The gates on all its borders on every side were wide open. Evil principalities, powers, and hosts of wickedness were entering in on all sides. They were entering on the west from Asia, on the east from Europe and Africa, and the South bringing in such things as Santeria and Voodoo. Many people steeped in idolatry, and the occult came and worked their way to the top of the mountains of all social spheres and realms, and opened the gates ever further, especially within the political, education, medical, and family sphere.

God did His best to try to enlighten His Church. He released the seven-mountain revelation through Lance Wallnau and others—the revelation of Christian leaders moving out in His authority into the marketplace, politics, and all spheres to occupy these mountains. I think the attempt to occupy has largely failed as the level of yieldedness to Christ, the character needed, and deep consecration required has been lacking. Those who were willing and qualified had very little support and prayer covering from the Church. As a result, we have now found ourselves in the Battle of the Ages—a great clash of kingdoms of Biblical proportions. Satan’s forces fight to hold the pinnacle of every mountain, in possession of the global finances necessary to hold and occupy.

How then do we take back what has been lost? The genie is out of the bottle! Pandora is out-of-the-box! Evil is aggressively ruling in every sphere as Christian squabble over the non-essentials and continually slander each other. We see evidence of the same pattern in the Bible. Because of disobedience to hold the line of righteousness, Israel began to embrace the idols of the surrounding nations, and God abandoned them to the consequences of their decisions for a season! However, God in his mercy, after a time of great trial and trouble would always send a deliverer to deliver the nation. However, it was always through fierce battles that victory came.

Today, God has raised an army of deliverers—sons, and daughters with whom He will work! If God could do it with one man, or one woman as He did with Deborah, what could he do with an army? God does not need a vast number as we see in the account of Gideon. He just needs a company of lion-faced Saints fashioned in the image of Christ. He is ready! He is arising! We have entered a new Season.  The Lord is saying, as He said in Isaiah 42, …for a long time I have held my peace, now I will cry! Now I will roar!

The three spiritual movements now coming together in this hour are creating the perfect storm. The FBI raid at Mar-a-Lago is an omen, a sign that portends what lies ahead—a great and tumultuous conflict. God is raising up His army on every front to fight in the trenches—boots on the ground, firepower in the air, in every sphere, and on every mountain, in the Church, and the Marketplace—a people who will not back down, who fear nothing but God!