In January of 2020, during a time of worship, I received a vision of myself standing in a boat in the middle of the ocean, with my hands raised in joyous worship in the middle of a great storm. I then heard the words of the song Raise a Hallelujah: …in the middle of the storm. The Lord then spoke to me and said that this was to be my posture for 2020. Recently, as I sought Him for direction for 2022, I became overwhelmed by His Presence and saw a picture of dark stormy skies and Jesus standing in a small boat in the middle of the ocean beckoning to me to get in. At first, I was somewhat confused as I remembered the first vision of 2020, and because, in scripture Jesus stands on the water beckoning Peter. The words of the song Oceans then penetrated my thoughts: “You call me out upon the waters, The great unknown where feet may fail.”

I sensed that God was calling me to get into the boat with Him on a journey into the great unknown, and that His Sovereign Hand would be my guide.  I sensed that the Lord was saying that what lay before us, though unknown was already secured in Him. The Body of Christ was launching out with Him on the beginning of a most notable Journey where He alone controlled the oars, He leads the way, and His Sovereign Hand would be our guide. We are moving into a remarkable season of fulfilled destiny and inheritances received—to stand as unshakeable pillars of strength during a time of great shaking and great Awakening.

The Lord directed me to fast and draw close to become anchored and deeply rooted in Him for the year ahead. The great birthing of our Call and the seeds God implanted within us is about occur. A divine intervention is coming to empower us and break us into this historic time, as we are powerless to produce the promises and will of God. Jesus’ ministry was launched out of the wilderness, after a forty day fast He came out filled with the power of the Holy Spirit. I believe December is a time to fast and pray.

The times before us are somber, and it has become important to dig down deep to get to the River of God—the source of our peace, as His Peace guards our heart, and the source of our Joy as the Joy of the Lord is our strength. We are clearly living in a time of Government manipulation, great deception and propaganda, that will now be ramping up to another level, a time when great discernment and wisdom will be required. In the times of inflation, lack, and for some even famine, God will be our supply brought to us through the supply chain of the Angel armies of Heaven. God is well able to prosper us in times of famine as He did Isaac:

“Then Isaac sowed in that land, and reaped in the same year a hundredfold; and the LORD blessed him.” Genesis 26:12

One of the mighty moves of God that is about to be birthed is the Harvest. The shaking that is coming will shake loose the Great Harvest—now ripe and ready—from its iniquitous moorings. Much opportunity and power will be given to be witnesses of the great the love and compassion of our God. The Word of God says that the gospel is the Power of God onto salvation. We will see the power of the gospel released in supernatural miraculous ways, to bring forth revival an awakening as we have never seen.

I have been seeing the word SAC in capital letter in regard to the amniotic sac that protects and holds a baby in its mother’s womb. God then showed me that it was His acronym for a Strategic Apostolic Command that holds the will of God for this hour. The Earth is in a great travail that is about to bring forth a revelation of the Son of God; and the sons of God are in travail to birth the mighty moves of God and prepare the Lord’s way in revival and Awakening, charting the course for His future return.

The Breaker Anointing coming upon God’s present front line Apostolic leaders will break the SAC carrying the mighty, awesome strategies for the completion of God’s will for the end of this age. These are leaders who have died to their desire to be the leader, to control, to be the apostle or prophet, to be the one with the word.  The SAC breaks when pressure is placed on it from the head of the Child. The volatility rising across the Earth from raging storms is causing pressure within the SAC to birth the Will of God. The breaker rests on the head.

Adivine intervention is coming to empower us and break us into this historic time. As an anointed leadership is ready and the SAC breaks, the former and the latter rains of revival will converge, and merge releasing the River of God to gush forth over the earth as the waters covers the seas. Out of the womb of the SAC will break forth the Waters of Revival.  With arms embraced and locked in purpose, rivers of living water are about to break forth from Canada and the United States over North America and into the world. God is about to show up in power and glory to shock the world awake with His Majesty, His love and His Power.

The Lord said that December was the time to position ourselves in the birthing posture. The Body of Christ has been praying, interceding, and travailing for two years over 2020 through 2021; we are about to see God move in the third year! In 2022, the Holy Spirit will break out to raise and release the Bride in Resurrection Glory and she will leave her dressing room.

In order to break forth into the birthing of this new season the Lord dropped the word COHESIVE into my heart. HE SAID HIS BODY MUST BECOME COHESIVE! The definition of cohesive is the action of forming into a united whole. He showed me that each of us individually was powerful in our own right; we are anointed, gifted and called, However, He stressed that this was not sufficient to serve Him for the challenges of these times. We must become a united whole in our movements, churches and ministries—a Body in one accord—wherever that is possible.  The Commanded blessing shall be released upon gatherings that are in one accord to birth the Will of God.

Becoming united in the purposes of God has always been the struggle of the Church, as flesh, agendas and issues get in the way. I sense God is now saying that it is time to get rid of our idiosyncrasies, as the time is now, and the time is short.

After the Fall Feasts of 2021, we shifted into a kairos appointed time, and God began trumpeting the call to get ourselves ready to board His train. I hear the shout ‘ALL ABOARD’ now coming with urgency in December—the Glory train is preparing to depart from the station–the church building. Those trying to bring back the old ways need to get onboard!  Things are moving at an accelerated pace and God has given us much time to get prepared and positioned, to get fully onboard with His will and His Word and the movements of the Wind of the Holy Spirit! 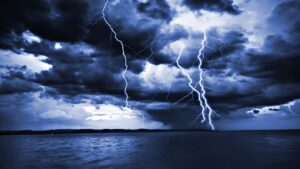 Storm clouds are presently brewing! Israel is preparing its people and mobilizing for war with Iran; Russia is mobilizing over a hundred thousand troops and tanks at the border of Ukraine, and China is making threatening fly overs, over Taiwan. The drum beat of war is sounding!

In the seven letters to the Ekklesia Jesus admonishes His people to become overcomers for the times of trouble. The book of Revelation is the uncovering and revelation of Christ in all His Power and Glory! Revelation 12 has been mistakenly taught to be the birth of Christ—it is the birth of the sons of God in union with the Son of God as the ruling authority for the times. Verse 5 describes the travail of the woman as giving birth to a Man Child that will rule with a rod of Iron (KJV). The Greek word for man is uihos and means a mature son. This verse is quoted 4 times in scripture and originates in Psalms 2:9 spoken by the Father to the Son. I believe this is the chief reason it has been taught that the birth of the Man Child is the birth of Christ.

“Ask of Me, and I will give You The nations for Your inheritance, And the ends of the earth for Your possession. You shall break them with a rod of iron; You shall dash them to pieces like a potter’s vessel.”

However, Jesus Himself decrees this prophecy about Him, over the overcoming saints of His Ekklesia—that they may receive it just as He has received from His Father.

“And he who overcomes, and keeps My works until the end, to him I will give power over the nations—’HE SHALL RULE THEM WITH A ROD OF IRON; THEY SHALL BE DASHED TO PIECES LIKE THE POTTER’S VESSELS’— as I also have received from My Father; and I will give him the morning star.” Revelation 2:26-28

Ruling with the fullness of this level of authority comes with the understanding of the necessity of an authentic union with Israel through Christ, whose feet and head are forever positioned in Jerusalem (Ez. 43:7). We are now being called to come to attention; to be secured and anchored; to gather, to mobilize and prepare to travail in intercession and to rule with Christ over the demonic winds and storms now swirling over the nations. All aboard!