Over the recent week of Passover, and the week leading up to it, there was a great prophetic emphasis on the time of Israel’s first Passover in Egypt. This was much more than just a similarity to the events we are living through now in the world—with the pestilence, God’s instruction to put the blood on the doorpost of our hearts, stay inside our homes and get close to Him, until the plague passes over. God is getting the world’s attention, melting our hearts and calling the Church into a time of deep consecration.

I attended one of the corporate Zoom meetings on which thousands participated from the nations of the world; there was such an honoring among the leaders and a sweet sense of God’s Presence over it all… that moved you to tears. Most notable was the Bread and the Cup shared between Jewish leaders in Israel and Gentiles all over the world, at the heart of God’s intention for the One New Man of Jew and Gentile in Him.

After this event God gave me a brief vision, inspired by that time; He showed me a picture of white bridal lace having a floral design!  As I pondered the significance, He gave me the analogy of the lace being a fisherman’s net.  He said that as the body becomes a Bride, Her Bridal garment of honor and union would become the net He would use to catch the billion soul Harvest.

The theme for me that week was union, communion, and the sovereignty of God over the Jewish Passover out of Egypt. However, we should note that we are not passing over from Egypt into the wilderness. This was the week of our second of three Prayer Thrusts God instructed us to have, which occurred on Good Friday.  As it turns out, this day fell on the evening of the third day from Passover—the time of resurrection!

That day I kept getting a niggling thought about ANOTHER PASSOVER but wasn’t clear what God was saying. God then began to speak to me about this other Passover—a second Passover with great implication! This became the theme of our 2nd Prayer Thrust. When the children of Israel were preparing to cross over the Jordan into the Promised Land, God instructed them to follow the Ark, as they had not passed this way before!  This is a present word for us today as we are moving in uncharted territory; all that we can do, and all that God would have us do, is cling to His Presence and listen to the Apostolic, Prophetic leaders who carry His Presence.

During the wilderness season, many had died because of disobedience. God was waiting for a new generation who knew how to follow Him and obey His instructions. A new breed had arisen in the wilderness whose obedience had been made complete. They had become the Army of the Lord who would cross-over into the Promised Land corporately as a people.

However, upon their entry into the Promised Land, God again put them into a lockdown. Those who had not been circumcised in the wilderness, had to be circumcised. They remained together in the camp, while they were healing, in a weakened, helpless state in the midst of enemy territory. God is able to do much in our hearts during these times of shutdown when we are still and quiet before Him—it is the grand pause or rest before the music re-starts.

Israel remained in their camps until they were healed! They were about to go to war for the Promise and God’s required preparation was heart consecration. This is as it is today, our hearts are being circumcised! The knife is being put to our flesh and our agendas founded upon our good ideas. Many have conformed to the world’s standards rather than conformed to Christ. After, He declared to them, as He is now saying to us, “Today I have rolled away the reproach of Egypt from you” (Josh. 5:9).

After their time of consecration, and the day after the Passover, something very substantial happened, THEY ATE OF THE PRODUCE OF THE LAND FOR THE FIRST TIME—the manna had stopped, THEY HAD ENTERED A NEW SEASON OF LIFE!  These are all markers for us to take note of as we become a new wineskin, made ready for new wine, and prepared to move out! As they prepared themselves for war, the crowning event then took place; Joshua had an encounter with a MAN.  Joshua asked Him if He was for them or for the enemy; the MAN answered:

“Neither,” he replied, “but as Commander of the army of the LORD I have now come.” Joshua 5:14

The LORD came to lead them in War; He made it known and very clear that He was there to establish God’s will not man’s.  As I took communion the morning of our Prayer Thrust, I saw a vision of the Commander of the armies of God in full armor and saw myself kneel before him.

In a previous word I wrote, I referred to the THE SILENCE of the marching around the city of Jericho and compared it to the stillness of the lockdown. However, on the seventh day they marched Seven times around the city, then blew their shofars; then all shouted as the wall collapsed before them. Joshua said to them, “Shout for the Lord has given you the city.”

Over the following week I began to think about our 3rd Prayer Thrust and what God would have to say about it.  The date was to be on May 8th, the dates for all three had been set from early February.  The last was to be in May as God had said to me from January 2019 that May was going to be significant…to watch for May.  As I pondered these things, I felt God said to check the date, May 8th on the Jewish Calendar.  I was surprised and confused when I saw that it said Pesach—Passover.  God was revealing another noteworthy Passover to me. This one is based on the account in Numbers chapter 9:1-2

“The LORD spoke to Moses in the Desert of Sinai in the first month of the second year after they came out of Egypt. He said, “Have the Israelites celebrate the Passover at the appointed time” Numbers 9:1-2

It was one year after the Exodus from Egypt, and there were some who could not participate in this Passover Feast because they were unclean for various reasons, and could not keep God’s regulations. Moses inquired of the Lord for them and God answered:

“…they are still to celebrate the LORD’S Passover, but they are to do it on the fourteenth day of the second month at twilight. They are to eat the lamb, together with unleavened bread and bitter herbs.” Numbers 9:11-12

God mercifully allowed these to hold the Feast in the second month instead of the first. This Passover Feast became known as the second chance Passover. According to Jewish writings, “The day represented by the “second chance” achieved by the power of teshuvah, repentance and “return.” (Chabad). 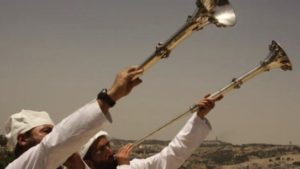 The second chance Passover falls on our third Prayer Thrust on May 8th.  I don’t think any of this is a coincidence, and fully believe that God is mercifully allowing time for those who have not understood, and have not taken this time apart to consecrate themselves to Him at a deeper level.  He is giving another chance and another opportunity to everyone to get their hearts right before God. As God said in Isaiah 42, He has been silent for a long time, but now He has stirred Himself. He has arisen and is getting ready to move out with the Armies of God to take the promised land and gather His Harvest.  It’s time to blow the shofars and to shout! In Isaiah 49:24, God asks and answers the question:

It’s time to go after the captives and take plunder from the enemy!

I BELIEVE IT’S TIME TO SHOUT! GOD WANTS HIS HARVEST

SHOUT FOR YOUR NATIONS TO BE RELEASED TO ITS DESTINY

SHOUT FOR YOUR NATION TO BE RELEASED FROM THE COVID 19

SHOUT FOR THE ENEMY TO FLEE BEFORE YOU BECAUSE THE ARMIES OF GOD ARE ON THE MOVE!

The fear of God is upon the people and the enemies of God, so shout!

(Our Prayer Thrust will  be posted on Facebook Live on May 8th at 7 pm on my page—Faith Marie Baczko.We will also post a live meeting on Friday the 17th  at 7 pm where I will share an important follow up revelation on this word )