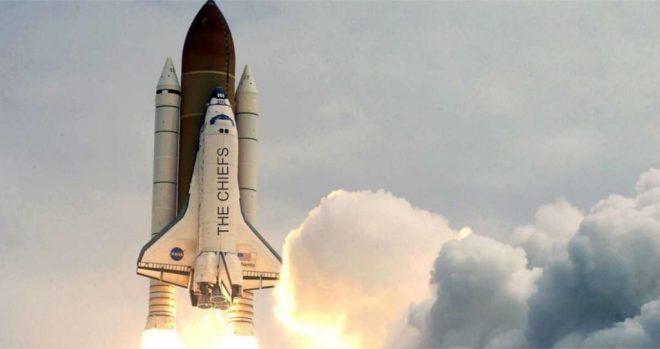 During a leaders meeting I recently attended, I had a vision of a Rocket Ship about to launch with flames shooting out from its base. Attached to the tip was a silver armed warhead. The Lord then began to lead me into an understanding of this revelation which continued to expand in depth over the following week. He highlighted three important features and objectives of a rocket and related it to the present purposes of His apostolic leaders, the first of which is exploration:

Exploration, is the action of searching unknown territory for resources. Space exploration takes this to another dimension in its reach for new heights and new discoveries in the cosmos that would be of benefit to mankind. In this prophetic picture God is raising our thought processes to include what may have been previously thought to be impossible—to include the cosmic and supernatural realities made available to the church by God, but have been long ignored.  Just as the pioneers of old broke through to occupy new frontiers, the decade of the 20’s will see the people of God advance with an apostolic thrust into new dimensions of God’s Glory and of the powers of the age to come (Heb. 6:5)

“Praise be to the God and Father of our Lord Jesus Christ, who has blessed us in the heavenly realms with every spiritual blessing in Christ.” Ephesians 1:3

The Military and Warfare

The second feature of a rocket is in the arena of War.  Rockets can also be armed as a weapon of war as in the case of a missile. Rocket propelled missile artillery, deliver explosive warheads to their targets. They can also be defensive in nature, designed to blow up incoming missiles, as the Israeli Iron Dome defense system was designed to do. In the vision, I saw that the rocket had a silver warhead on its tip, representing the supernatural dunamis power of the Word of God’s power that seeks out and destroys the enemy strongholds.

“…so is my word that goes out from my mouth: It will not return to me empty, but will accomplish what I desire and achieve the purpose for which I sent it.”  Isaiah 55:11

“And the words of the LORD are flawless, like silver purified in a crucible, like gold refined seven times.” Psalm 12:6

The Iranian government—the enemy of Israel and the people of God—routinely sends messages to Israel written in Hebrew on its ballistic missiles, such as, “Israel must be wiped out!” However, written on the side of God’s Missile were the words, The Chiefs!  Many words have been recently written, and there has been much talk about Bob Jones’s prophecy regarding the Kansas City Chiefs. Bob shared that when The Chiefs won the Superbowl it would begin a great revival! He also prophesied that in 2020 the great Harvest would begin—these two events have collided this year! Bob also shared that the Chiefs represented the Apostolic Chiefs being released.

Just as Iran sends messages to the people of God on its missiles, with the finger of God, God is writing on His Holy Ghost Ballistic Spacecraft, “My Apostolic Chiefs are Coming!”  God is NOW getting ready for a pre-emptive strike against the enemy that thrusts His Apostolic, Prophetic Chiefs  out, empowered by the DUNAMIS FIRE POWER OF GOD. 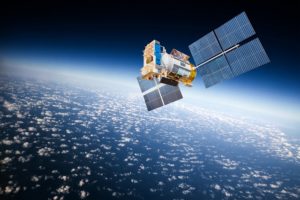 The third feature of a spacecraft is in the area of communication. Rockets deliver satellites that are now routinely positioned in space to establish and expand communication, sending important data and intelligence back to earth. Satellites gather information to benefit mankind, and also provide intelligence on our enemies plans and movements. God’s Apostolic, prophetic Spacecraft carries the eyes of God that sees all and communicates that information to His leaders—It is His Heavenly Intelligence Agency providing vital and strategic information, released to navigate His people safely to the Destination of the Promised Land of Christ.

God’s Apostolic and prophetic leadership have been released to lead the Body of Christ, and is equipped and backed to establish Heavenly strategic initiatives. These initiatives are designed to establish communication systems and constructs for Heavenly intelligence to be released and take vast territory now occupied by the enemyThe apostolic has embedded within the mindset of its ‘going’ a view of the spiritual dimension and the cosmic realities that work to incessantly resist it at all costs. However,  the people of God the people of God have entered a NEW DAY, and will no longer stay on the defensive. This Apostolic Spacecraft is a move of God that is offensive by design, is armed with faith and will deliver targeted Holy Ghost bombs designed to break through the strongholds holding people in captivity.

This Heavenly Spacecraft carries the mandate of Isaiah 61—the passage Jesus read at the launch of His Ministry. Jesus moved out on the offensive, empowered by the Holy Spirit and the Word of God spoken through the prophet Isaiah—we must do the same! This is an anointing that declares the Year of The Lord’s Favour, is empowered to set captives free and to repair ruined Cities.

The Lord also showed me that presently there were rules and regulations based on man’s agenda that were restricting the launch and thrust of this Apostolic Spacecraft. These were regulations that were working to suppress His supernatural work and stifle the moves of the Holy Spirit, founded on the world’s reasoning and the world’s economic system. He then highlighted the example of President Donald Trump’s economic strategy: after becoming President, he immediately removed the burden of hundreds of regulations the previous administration had placed on the U.S. economic system.

With the added impetus of America’s alignment with Israel and the moving of the embassy to Jerusalem, the U.S. economy took off like a rocket and continues to rise. America may fear recession and economic collapse, but its economy is held and fully under the sovereign control of God, fully empowered by the Word of God that blesses those who bless and take care of His people Israel. Trump’s strategy is also a prophetic picture for the Church. As we now being prepared to launch, it is important to examine and re-evaluate the economic structures we have put in place, whether they are founded on Biblical principles or on the principles of the world. God is asking us to step off of the ground of carnal policies and ascend by faith to life in the power of God, where the Wind of the Spirit thrusts us ever higher into the dynamic of the supernatural eternal life we were meant to live.

Women will be thrust to the forefront of this move of God as an integral part of the Company of Chiefs. Women are being invited to take this place prepared for them by God from before time. If women will rule and reign with Christ at His return, they will also reign with Him now in this time. Women are God’s secret weapon reserved by Him FOR SUCH A TIME AS THIS! They will work alongside men as Barak worked with Deborah, Mordecai with Esther and Aquila did with His wife Priscilla. These women were raised up and released by God for their times. God has done this throughout history and is presently doing it again! Women will be key as leaders in the battles ahead—the precedent has been set!

“God Almighty declares the word of the gospel with power, and the warring women of Zion deliver its message…” Psalm 68:11 TPT

On the road ahead, it will be vital that we keep our daily appointment with the Lord, to be listening for His voice and, “…watching daily at His gates” as He moves out to take over, to lead His leaders and His people. God is searching now for those who will worship Him in both Spirit and in Truth! A life founded upon obedience to the truth of the Word of God and obedience to His precepts and principles, is the highest form of worship we can give Him!

The Lord is coming now as the Chief Apostle, the Chief Prophet and Teacher the One through whom God speaks; the Chief Shepherd who guides His people, as the Lord of the Harvest—the Chief Evangelist who works to gather His Harvest. Our posture now is to bow the knee to serve Him—His desires and His plan, to finish His work! He is poised to push the button for LIFT OFF! Are you ready!