On September 30th we will be entering the Jewish New Year of 5780. In Hebrew the number eighty is represented by the letter pey that means the mouth.  During worship at a recent conference I attended in Raleigh on prophets and the prophetic, I began to receive a download from the Lord as to this coming decade marked by pey and beginning 2020 on the Gregorian calendar.

Having passed through the decade of ayin, represented by the eye, and seeing, a season of having learned to see and align our spiritual eyes to what God is revealing—we are now entering the time of 20/20 vision, of being perfected in vision in order to speak, decree, and prophecy with a higher level of accuracy and specificity. Prophets and the prophetic will move to the forefront as God moves to release His Will on planet Earth. On Rosh Hashanah we will enter the decade of the mouth—a new season thrusting us into a Holy Spirit inspired boldness to speak forth the Word of God, imparting His will into all situations, circumstances, spheres and political, and economic realms.

THE VOICE OF THE LORD

This will be a decade not related to our words and agendas, but rather TO THE VOICE OF THE LORD, HIS WILL AND HIS AGENDA coming forth in the Spirit of THE FEAR OF THE LORD!

This will be a decade when we will see prophets and prophetic saints declare and decree with an unction supported by the Voice of the Lord, initiating great breakthroughs long-awaited for.  THE VOICE OF THE LORD WILL THUNDER OVER THE WATERS, impacting the seas of many peoples, shifting nations and governments. THE VOICE OF THE LORD SPLINTERS THE CEDARS, shattering the pride of man—God will shatter and divide the enemy plans and every proud thing that rises against His Will!  THE VOICE OF THE LORD DIVIDES WITH FLAMES OF FIRE, STRIKING WITH BOLTS OF LIGHTENING; God will move to strike at the heart of evil, and the occultic conglomerates empowering iniquity in the earth.

THE LORD SHAKES THE WILDERNESS OF KADESH—Kadesh meaning the place of defilement and all sexual uncleanness. The Voice of the Lord will shake the places of immorality in the earth, exposing and revealing all that is grotesque and horrific in perversion—God will move to release countless captives from these prisons of bondage and multitudes will be set free!  THE VOICE OF THE LORD MAKES THE DEER GIVE BIRTH—this will be a decade of birthing the promises of God the Body has been travailing for over the last decade. The number eight represents a new beginning and a door, this decade will be the decade of THE BIRTH.  We will see the birth of the Marvels of God and enter into the full knowledge of His faithfulness and goodness to mankind. I see a multitude of doors swinging open to new pastures and fields of creativity, innovation and Ministry, with the Bright Light of God shining with favor on His people, and everyone will shout, “Glory!”

In the decade of the mouth, prophecy will begin to bubble up in the mouths of God’s people, declaring the word of the Lord.  Prophets will rise with prominence and accuracy. The Lord says that this will be a time of extreme acceleration, where His Word will run swiftly to accomplish His will, and will not return void:

“…so is My word that goes out from My mouth: It will not return to Me empty, but will accomplish what I desire and achieve the purpose for which I sent it.” Isaiah 55:11

God told Abraham that Israel would be in bondage four hundred years and would be set free after the iniquity of the Amorites was complete, or at its fullness. When God was ready to perform this Word, He raised up Moses as a deliverer of His people.  Moses protested before God, saying that He could not speak. God’s answer to him was, “Who has made a man’s mouth?” He then tells him, “I will be with your mouth and teach you what to say!” (Ex. 4:10-12). In Hebrew the word ‘with’ can also mean ‘in,’ and the word teach is yarah and means to, flow as water or shoot like an arrow!

HE PUTS HIS WORDS IN YOUR MOUTH

Jeremiah also told the Lord that He could not speak, but God answered him:

“…you shall go to all to whom I send you, and whatever I command you, you shall speak. Do not be afraid of their faces, For I am with you to deliver you,” says the LORD. Then the LORD put forth His hand and touched my mouth, and the LORD said to me: “Behold, I have put My words IN YOUR MOUTH.”

God is getting set to release an army of deliverers in whom is the Voice of the Lord! His words will flow as water, releasing life and healing to the dry and parched places; bringing restoration to places defiled and destroyed by iniquity. The Lord will send forth His word from these deliverers—shooting them like arrows into the enemy’s camp to tear down strongholds, destroying their schemes!

These saints who have submitted to the process of preparation, will accelerate with the speed of light. I saw a picture of a person I know looking up toward the Heavens, I suddenly sensed in my spirit that she was about to lift off and take off into the fullness of her destiny!  I believe this picture is for many who have been trained in the refining fires of God. The Lord showed me these people having the character of the heroes seen in many movies, men and women who were beaten, thrown out windows, fell off cliffs…seemed to be dead, then got back up, to only be beaten again, fall out of planes run into by cars…and yet miraculously they got up again, and kept going—like the Terminator, nothing could stop them! 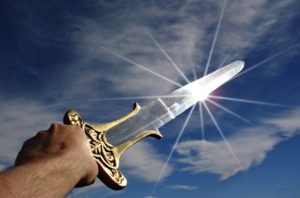 I saw that their internal capacity to contain the Spirit of God was maxing out, and the internal combustion within them heating up tremendously, making them ready to be thrust out like a rocket into the stratosphere! They took off and were gone. The anointing on them sends them out with power. There he goes! There she goes!  The Fire on their feet was getting too hot to stand still anymore. This anointing is the RESURRECTION ANOINTING that is about to break many out of their graves and the dead places. GOD IS THE ‘THRUST!’ He is the Fire, and the Power beneath our feet.  There is no stopping it and no turning back!

This anointing is to be suddenly and supernaturally pushed out, to advance forcibly in a certain direction.  The word thrust can also mean a forceful attack, a violent lunge with a sharp weapon. The people of God are the sharpened weapons that He will use to destroy His enemy. In Jeremiah 50 He says:

“You are My battle-ax and weapons of war: For with you I will break the nation in pieces; With you I will destroy kingdoms…” Jeremiah 51:20

Thrust is also the propulsive force that gives lift off. God is the thrust and propulsive force of His people, that moves them, sends them and clothes them with power to carry out His will. In the decade ahead the people of God will find themselves suddenly thrust out into new arenas, LOCKED AND LOADED with the power of the VOICE OF THE LORD. He is saying now as He said to Jeremiah, “I am ready to perform My Word!”

“Behold, I have put My words in your mouth. I have this day set you over the nations and over the kingdoms, To root out and to pull down, To destroy and to throw down, To build and to plant.” Jeremiah 1:9-10

This is the work of God’s apostolic, prophetic people prepared for this hour of history!