In an hour of history characterized by political turmoil and fragmentation, an accelerated descent into moral depravity—a time where the nations rage and the sanctity of life has become secondary to political agenda and globalist aspirations for world domination—a time where hate anger, prejudice and rabid opinions permeate the war of words over ideology—the greatest need of the hour calls for spiritual discernment and understanding, hearts ruled by the love and peace of God, that are fully committed to serving the will of God!  It is into this volatile arena and with reluctance that I step into the fray with the intent and hope of offering a Heavenly perspective—one I believe is from the throne of God, whose ways according to Scripture are much higher than that of humankind, and whose opinion is the only one that matters or counts!

“Who has directed the Spirit of the LORD, or as His counselor has taught Him? With whom did He take counsel, and who instructed Him, and taught Him in the path of justice? …Have you not known? Have you not heard? Has it not been told you from the beginning? Have you not understood from the foundations of the earth? It is He who sits above the circle of the earth, and its inhabitants are like grasshoppers, Who stretches out the heavens like a curtain, And spreads them out like a tent to dwell in. He brings the princes to nothing; He makes the judges of the earth useless.”  Isaiah 40: 13-14, 21-23

As the United States presidential elections draws ever closer, the whole world looks on intently as all recognize that whatever happens in America ultimately affects the entire world. This has been evident through the last eight years of the present administration, a time where all have watched the world descend into chaos and depravity, and the Middle East set on fire.  More importantly, in regard to Israel, the present administration has with cunning and deceit attempted to create an image that it stands with Israel, while through incendiary rhetoric has skillfully emboldened the Arab nations in their hatred of Israel, creating the climate for an accelerated rise of antisemitism around the world. Ultimately this stand is against God, as Israel is the nation chosen by God as the centre of His administrations on Earth both in the past and in the future.

The policies of this administration having the appearance of good, have ultimately been designed and inspired to rail against God and His determination to see the King of kings established on His Throne of Righteousness and Justice in Jerusalem. These policies directly oppose and undermine the Word of God, the purposes of God and His divine will and intention for humanity.

Those following this path, have said in their hearts we know better than God, let us depart from His ways, throw off His restraints and do as we please and see fit!  Should Hilary Clinton become the next president of the United States, she will promote the same path—regardless of what is promised, because of subservience to the interests of international Globalists who reject the Word of God!  Before her sudden death, Jill Austin was given a vision of these men and women who are attempting to take control of Governments of nations…especially the United States. I remembered this article well as it was a confirmation of things God had shown me ten years prior to the article being written, Jill Austin 2007.

To the shock and amazement of all, including himself, Donald Trump has risen to the top of the ticket and could become the next president of the United States. This is largely because people of the United States are beginning to see through the lies, the blatant corruption and deception of politicians, and they are not buying their wares anymore.   I believe that as the saints are rising up to pray for America, and intercession is going up before the throne of God and filling the bowls, God has begun to expose the deceit and corruption of Washington, as he has said in His word that every hidden thing shall be revealed.

I know there are many who may be angry that this article endorses Donald Trump, especially after the  things he has said and done, but GOD IS NEVER SHOCKED BY MAN’S DEPRAVITY AND SIN, HE CHOSE TO DIE ON THE CROSS FOR IT!  God has said in His word that, “No one is good but One, that is, God” also that, “The heart is deceitful above all things, and desperately wicked; Who can know it?” The Blood of Jesus has provided the Way of forgiveness to any who repent…even Donald Trump!  Many who accuse Donald Trump publicly do the same or worse in secret. God alone sees the heart and knows the heart He can work with.

Isaiah 11 describes God’s higher way of Justice through Christ, and the superior ways of God in his dealing with man:

When God showed up in my world 24 years ago I discovered that He was real, and that Jesus was alive! He began to show me things that has caused me grave concern for my family and many who say they are Christians.  I saw that there would come a time of masterful, sublime deception, packaged in the appearance of goodness and righteousness, crafted to play upon the emotions and lure the undiscerning into its traps. The greatest need for the hour is heightened spiritual discernment and understanding of the times, as many will easily fall into these spiritual booby traps because of proud personal opinions not surrendered to the will of the Lord.

It has been said that we are the Elijah generation, if so, then we must take the position and posture of Elijah who said on four occasions, “As the LORD God of Israel lives, before whom I stand…”  As God’s servants and priests, we stand in His Presence to serve His will and His agenda.  We are to live lives of ascension, far above the fray where we attain the perspective of heaven! We cannot afford to get caught into the swirl of the demonic winds of the political spirit, debate, anger, rage and opinions forged from the flesh—our objectivity is then compromised and we become useless in our service to God!  We must pray fervently for discernment and wisdom! Pray that the Body of Christ would have spiritual ears to hear and eyes to see behind the facade of lies being presented.  The gift of discernment is given only to those who choose to lay their lives and opinions on the altar, who humble themselves in true humility before the Lord!

Satan is moving to accelerate his agenda, and the world is on a precipice of being plunged into war and gross darkness; his desire according to Daniel, is to change times and seasons to push forward his agenda of war and chaos: “He shall speak pompous words against the Most High, shall persecute the saints of the Most High, and shall intend to change times and law” (Daniel 7:25).  The Clinton’s are disqualified as they have proven that they can be bought!  There is something very wrong and exceedingly dangerous about the return of Bill Clinton to the White House! 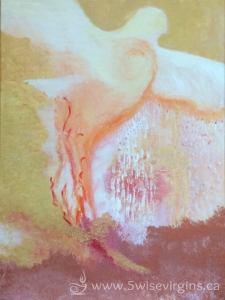 One of two people will win the coming election! The choice must be based upon the one whose administration and policies will be aligned with God’s Word and God’s agenda for the decade ahead.  RESET is the word that has been ringing loudly in my spirit in recent days—things are about to change!  I hear the Lord saying, His agenda is a RESET!  “Donald Trump is My Reset!”

God is seated on His Throne and is about to press the reset button—if He is merciful and does not give us what we deserve. God’s agenda is His harvest! God’s agenda is AWAKENING! God is about to make a way where there seems to be no way, to create an opportunity for billions to come into the kingdom.  (Painting by Anne Reid  – used with permission)

When I was first asked by the Lord to write this word, I must confess that the fear of man took hold of me and I resisted God. He then spoke to me about the courage of two women—Deborah and Jael, who rose up to overcome their fears.  Even then I resisted, and asked for clearer confirmation before I would write. I opened the Bible to a commentary on the Zadok priesthood—they were the priesthood of whom God said were the only ones He would allow to come close to Him, as they were the only ones who remained faithful to Him during a time of spiritual declension.  I had this word sitting on the shelf until I saw the word written by Lana Vawser and her courage gave me courage.  This commentary linked the Zadok priesthood to 2 Samuel 2:35, “Then I will raise up a faithful priest WHO WILL SERVE ME AND DO WHAT I DESIRE.”

God is now searching for His Zadok priesthood who will rise up with courage, who are not afraid to be a trumpet and lift up their voices.  We are the generation that have been given a voice to prepare the way of the Lord and He expects us to be faithful to use it. God is calling us to live as Kings and priests before Him; to take ownership of His interests as co-heirs with Christ; to rule like Kings and serve Him in courage and obedience as His priests.  This is the year of the Triple crown and the triple sword—a year to rise up in kingdom authority and serve only the intentions of the King. We cannot afford to be complacent and silent anymore, the stakes are too high!

I felt the Lord say that an order has gone out from the spirit realm into the natural, to stop Donald Trump at all costs, (recently confirmed by a talk show host). Donald Trump is not a player. The Globalists and those at the top cannot tolerate a Donald Trump administration that would interrupt their plans, and they will stop at nothing.  Russian relations are spiraling out of control daily and could accelerate into a time of catastrophic war—it is time for a true reset in relations with Russia. Christians and prayer ministries around the world, need to get involved and pray that America will take up their God-given right to vote and make the right choice. Pray that the enemy’s agenda to change times and law will be halted. Pray for the protection of Donald Trump and his family. Pray for the will of God to be done!

Our Father in heaven, Hallowed be Your name. Your kingdom come. Your will be done On earth as it is in heaven. Give us this day our daily bread. And forgive us our debts, as we forgive our debtors. And do not lead us into temptation, but deliver us from the evil one. For Yours is the kingdom and the power and the glory forever. Amen. Matthew 6:9