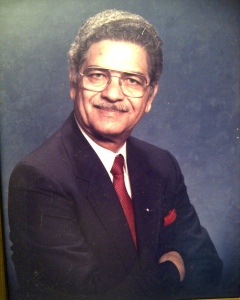 I would never be able to speak about my father without speaking about my father’s God, as his life was defined by the God that he loved and served, and his life would have been a different one without the divine intervention and help of God. When we were young my father would tell us the story of the time in the early part of his life when at 7 years old he ran away hid on a train then got lost in the jungles of Honduras. Night fell and in the darkness listening to the sounds of the jungle he became terribly frightened. Suddenly he saw a small light in the distance and made his way toward it. There he found shelter, food and kindness from the people who lived in a small hut who helped him to find his way to his mother. In later years after having married my mother and having many children, he come home from a bar one night when he was arrested by God through the preaching of a street evangelist. That night he gave over control of his life to his new found heavenly Father, the One who had always loved him and had guided him to the light when he was lost at 7 years old. The Bible speaks of the Father’s great love for His children in Jeremiah 31:

The LORD has appeared of old to me, saying: “Yes, I have loved you with an everlasting love; Therefore with lovingkindness I have drawn you.”

The Father of Creation became my father’s God—a loving Father who pulled him up out of the miry pit, set his feet securely on the rock that is Christ, and proceeded with the process to establish him in a brand new life. At that time it was difficult for my Dad to provide for so many children, but through much prayer to the One under whose care my parents now lived, they began to see miracle after miracle in provision and a supernatural guidance that eventually established my father in Jamaica as a man of dignity and integrity as a successful business man.

My father became a faithful son and servant of God all the days of his life, preaching and telling others of the Good News of his Savior—Jesus Christ. From one divine encounter on the street where he encountered God, to the very end of his life, my Father never looked back or turned away from the God who saved his life and pointed it in a new direction—one that was anchored in hope with great possibilities, just as God promises in His in His Word: “For I know the plans I have for you,” declares the LORD, “plans to prosper you and not to harm you, plans to give you hope and a future” (Jeremiah 29:11).

My father often referred to himself often as father Abraham as his tribe increased to 10 children, 20 grandchildren, and 22 great grandchildren. In love, the Heavenly Father also became a Father to my father’s children and the generations that were to follow, whether they have known it, acknowledged it or not as God’s Word states that He will show love to a thousand generations of those who love Him and keep His commandments, and that my father did. Just as He has promised the Heavenly Father faithfully has kept watch over our family, protecting and guiding us over the years through the daily prayers of my father and mother. This great God will keep His promises to my father to bring us safely home also.

My father loved his family and had great concern that they also would find the Light and encounter the Living God as he had. As a proud, rebellious, self-centered and selfish teenager I rejected my Father’s God, I wanted to be free and to have nothing to do with religion. I didn’t know in my ignorance that I was the one in prison to strongholds and mind-sets that controlled me that I could only be set free by the love and power of God.

My father was very concerned for me and I would find gospel tracts and literature in my purse or left around my apartment. He would also buy me Bibles that I would never read, until late one night when I was 35 years old on a night I will never forget I encountered my Father’s God and heard him speak clearly the words, “pick it up and read.” I looked over at the brand new little green bible on my side table my father had recently bought for me that I had never opened and began to wrestle with the voice as I did not want to read. But the voice was persistent and I gave in and opened the Bible to one of the Gospels and began to read. For reasons that I could not understand or explain buckets of tears began to flow from my eyes as I read the words; words that seemed to be alive and living that were jumping off the pages right into my heart. I wept and wept as I remembered the words I had learned at Sunday school where my father would drive all four of the younger children faithfully every Sunday afternoon. As I read, the words were captivating me and capturing my mind, my heart and my soul. That night, because my father never gave up in prayer for me, I encountered the Living God. Thirty five years of my father’s prayers were answered in a moment as the Holy Spirit of God found His way into my heart and made it His home.

My father’s God had become my God! And Like my father, from that initial encounter with the love of God I have never looked back, following Him closely on a journey that only He knows where it will lead and where it will end. Moses song of deliverance became my song, “The LORD is my strength and my song, and He has become my salvation; He is my God, and I will praise Him; My father’s God, and I will exalt Him.”

Like my father, who having tasted of the goodness of God, and encountering His love and faithfulness daily in a personal way, I have learned of the magnificence of His ways and the beauty of His heart, living daily under His divine protection and care, I can only say as Peter said when Jesus asked him if he wanted to turn back, “Lord, to whom shall we go? You alone have the words of eternal life.” Like my father, I will serve my God and my Father’s God all the days of my life to the very end. The thought of life with Him would be hell to me. And like my Father, one day I too will be gathered in the everlasting arms of love and brought home to live forever in the Glory of His Presence to gaze at the beauty of His face for all eternity.

Heaven is a real place, it is the Father’s home—the Kingdom of His Son. Jesus said in the bible that many will try to get in through other ways but declared that He was THE DOOR. In that famous verse He said, “I am the way, the truth and the life no one comes to the Father except through Me.” How could He make such a statement! Jesus is the Door to Heaven as He alone paid the price on the Cross to redeem us for Himself. His life is the ransom for all, so all can freely come through Him. Jesus knew my father well and loved him greatly. He took care of my father all the days of His life and now he has gone home to be with His Father in heaven for all eternity, and has joined a great company of saints; the Bible refers to as the great cloud of witnesses:

“Therefore we also, since we are surrounded by so great a cloud of witnesses, let us lay aside every weight, and the sin which so easily ensnares us, and let us run with endurance the race that is set before us,” Hebrews 12:1

Dad’s home is now the City of the living God as described in Heb 12:23: “But you have come to Mount Zion and to the city of the living God, the heavenly Jerusalem, to an innumerable company of angels, to the general assembly and church of the firstborn who are registered in heaven, to God the Judge of all, to the spirits of just men made perfect, to Jesus the Mediator of the new covenant, and to the blood of sprinkling that speaks better things than that of Abel.

This is the face my Dad now sees: “I turned around to see the voice that was speaking to me. And when I turned I saw seven golden lampstands, and among the lampstands was someone like a son of man, dressed in a robe reaching down to his feet and with a golden sash around his chest. The hair on his head was white like wool, as white as snow, and his eyes were like blazing fire His feet were like bronze glowing in a furnace, and his voice was like the sound of rushing waters. His face was like the sun shining in all its brilliance. When I saw him, I fell at his feet as though dead. Then he placed his right hand on me and said: “Do not be afraid. I am the First and the Last. I am the Living One; I was dead, and now look, I am alive for ever and ever! Revelation 1:12-18

My father now walks with Him on streets of gold.
One day I too will see My God and my Father’s God and will walk with them.